We are Dirk & Aafke Goor and live together with our daughters Julie and Milou and two American Staffordshire Terriers, Lillo and Noura in The Netherlands. Since 1 Aug 2015 cairn terrier puppy Sona also came to live with us. Sona comes from the kennel Macbuff.

The rest of the Dirk's dogs on our site live with friends in ownership or sometimes in co-own., In this way, every dog ​​gets his /her own specific attention that they need. Dirk's Amstaff chooses to keep dogs as pets and not in kennels.

This is the reason why Dirk's Amstaff kennel consists of more than 2 people. We have a large group of friends around us who form our kennel Dirk's Amstaff. Together we take part in dog shows or we do other fun things with the dogs. Thanks to our friends, participating in shows and continuing our hobby is possible.

After Aafke and Dirk met each other, they carried on together in their search for new adventures and new dogs. In their search they discovered the American Staffordshire Terrier. Not just the appearance of this breed of dogs, but certainly also its character appealed enormously to them both.

After pondering a long time which dog they would like to buy, they arrived at the kennel Old Hickory, where they bought Aristarock, Rista for short. Shortly afterwards they went on a trip to the Czech Republic, and, from the kennel Tipit Z Hanky, they bought the he-dog Jagger Tipit Z Hanky, now known as Jagger.

After studying the American Staffordshire Terrier, bloodlines, breeding standards, and following the course KK1 they bred their first litter from Old Hickory Aristarock and Are Forever Tipit Z Hanky. The result was six pups, of which they kept two: Dirk’s American Ice and Dirk’s Adjanga, of which they have joined ownership. With these dogs, Dirk’s Kennel hopes to have laid the foundation for a kennel for these super friendly dogs and hopes to contribute to preserving this beautiful breed. 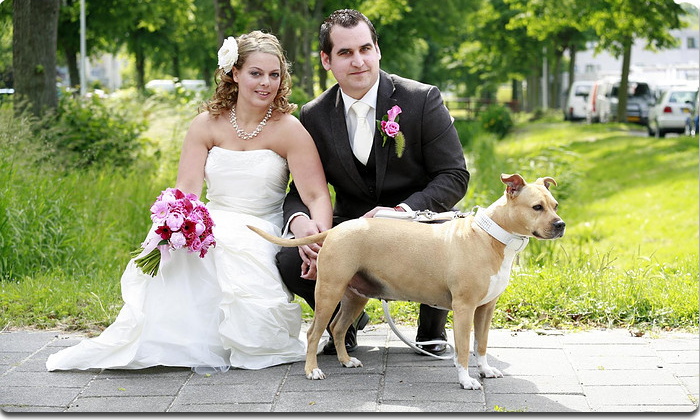